This page is a try to show what is going on when you do filtering and network address translation.

We will work on the following example : 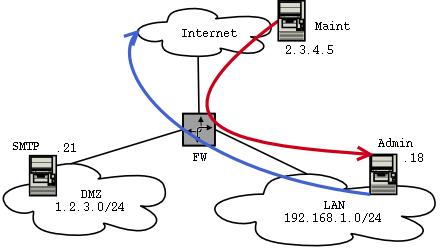 But, there’s a really unwanted things, we want Admin to be accessible from an outside counterpart named Maint with address 2.3.4.5 on port 22 for ssh maintenance [1].

Netfilter was designed with the idea to write firewalling rules as easy as write a network shema on a papersheet or speaking. By speaking, I mean sentences such as :

So a simple way to classify the packets managed by a firewall is to be split the flow in three parts :

Assuming that, the simpliest way to manage authorization is to use this three categories which we name :

For the outgoing packets we’ve got two chains :

Thus, the packets flow is the following :

Now, we want to redirect the packet going to the port 80 of the IP of the firewall to a webserver in the DMZ. That’s called destination address translation because the firewall as to change the IP to wihc the packets are going. With such a scheme we’ve got packet going to INPUT (port 80 of the IP of the firewall), but redirect to FORWARD (they are routed to a webserver in the DMZ). So if the kernel decide the routing before the destination IP is changed, he will do a mistake because the destination chain is changed by the DNAT. So it’s necessary to modify the packet before the decision is taken at the kernel level, so we must have this scheme :

The destinations related headers of the packets have to be modified in the PREROUTING chain before the packets are routed by the kernel.

At contrary, suppose we want to permit to the user in the LAN to go on webserver on the internet. The packet will have their source IP changed by the firewall. So, we will have packet coming from the FORWARD chain modified in packet coming from the firewall, thus packet that should have come from the OUTPUT chain. If the addressed is changed before these two chains, we’re going into problems because, classification will be wrong. So it’s necessary to act after this two chains. As we want to do everything we want and as we don’t want to confused the routing algorithm, we have to change the packet header after the routing occurs. Thus we have the following scheme :

So the Netfilter code act in the POSTROUTING chain to change source related headers (doing SNAT), or to do other funny things. A more complete schema is available, including quality of service stuff is available here.

Stateful filtering, the way to simplicity

As we just saw, Netfilter filtering wants to be as easy as speaking. When we say “I want to authorize the access of people to my webserver through my firewall”, what does really happen and what do we really want ?

The sentence “I authorize the packet coming in response of something I have authorized” does the stuff really well. Every answers enter in that criteria. But here’s the question : “Can Netfilter do this ?”. I’m sure you already know the response 😉

How does Netfilter do to know that a packet is a response to a previously authorized one ?

The kernel maintains a table that record every session [2]. You can see all the records in the virtual file /proc/net/ip_conntrack.

When a packet comes to an interface, the Netfilter code looks at the ip header to see if it indicates that the packet is part of a known session. Depending of the case, it fix the state of the packet which can be :

Using that, the sentence “I authorize the packet coming in response of something I have authorized” is translated to “I authorize packet with state NEW and or ESTABLISHED to go through the firewall”.

But what is really a Netfiler rule

Let’s use on of our sentence : “I want to authorize the access of people to my webserver through my firewall.” A netfilter rules is just saying it to the kernel. So, it just a decision about packets. A generic decision is just “I want all packets which match this criteria to have the destiny I choose here”.

As we saw earlier we have many tables (or chain) we can act on (mainly INPUT, OUTPUT, FORWARD). Thus a rule has to be specific to a table. As we want to be able to use more than one rules, the kernel maintains for each table the list of rules we have added to the table. So, when a packet comes to a chain, it’s faith is decided by looking if it match the criteria of one of the rules of the chain. This is done using the simplest way possible, the kernel take the rules sequentially in the order they have been given to it. So Order does matter. If a packet match a rules is faith is done. If it is not the case, we have to decide what has to be done. This is done by following the policy of the chain which can be to :

Rules are injected in the kernel using the iptables command.
Fixing policy

5 thoughts on “Introduction to Netfilter”