The IDS/IPS suricata has a native support for Netfilter queue. This brings IPS functionnalities to users running Suricata on Linux.

Suricata 1.1beta2 introduces a lot of new features related to the NFQ mode.

One of the main improvement of Suricata IPS mode is related with the new stream engine dedicated to inline. Victor Julien has a great blog post about it.

Suricata can now be started on multiple queue by using a comma separated list of queue identifier on the command line. The following syntax:

will start a suricata listening to Netfilter queue 0 and 1.

The option has been added to improve performance of Suricata in NFQ mode. One of the observed limitation is the number of packets per second that can be sent to a single queue. By being able to specify multiple queues, this is possible to increase performances. The best impact is on multicore systems where it adds scalability.

This feature can be used with the queue‐balance option the NFQUEUE target which was added in Linux 2.6.31. When using −−queue−balance x:x+n instead of −−queue−num, packets are then balanced across the given queues and packets belonging to the same connection are put into the same nfqueue.

One of the difficulty of IPS usage is to build an adapted firewall ruleset. Following my blog post on this issue, I’ve decided to implement most of the existing mode in Suricata.
When running in NFQ inline mode, it is possible now to use a simulated non-terminal NFQUEUE verdict by using the ‘repeat’ mode.
This permit to send all needed packet to suricata via this a rule:

And below, you can have your standard filtering ruleset.

Configuration and other details

To activate this mode, you need to set mode to ‘repeat’ in the nfq section.

This option uses the NF_REPEAT verdict instead of using a standard NF_ACCEPT verdict. The effect is that the packet is sent back at the start of the table where the queuing decision has been taken. As Suricata has put on the packet the mark $repeat_mark with respect to the mask $repeat_mask, when the packet reaches again the iptables NFQUEUE rules it does not match anymore because of the mark and the ruleset floowing this rule is used.

The ‘mode’ option in nfq section can have two other values:

The idea behind the route option is that a program using NFQ can issues a verdict that has for effect to send the packet to an another queue. This is thus possible to chain softwares using NFQ.
To activate this option, you have to use the following syntax:

There is not much usage of this option. One mad mind could think at chaining suricata and snort in IPS mode 😉

Effect and usage of nfq_set_mark

A new keyword nfq_set_mark has been added to the rules option.
This is an enhancement of the NFQ mode. If a packet matches a rule using nfq_set_mark in NFQ mode, it is marked with the mark/mask specified in the option during the verdict.

The usage is really simple. In any rules, you can add the nfq_set_mark keyword to specify the mark to put on a packet and what is the the

That’s great but what can I do with that ?

If you are not familiar with the advanced network capabilities, you may wondering how it can be used. Nefilter mark can be used to modify the handling of a packet by the network stack, ie routing, quality of service, Netfilter. Thus, the concept is the following, you can use Suricata to detect a suspect packet and decide to change the way it is handled by the network stack.
Thanks to the CONNMARK target, you can modify the way all packets of the connection are handled.

I’m currently working on suricata and one of the feature I’m working on change the way the main structure Packet is accessed.

One of the consequences is that almost all unit tests need to be rewritten because the use Packet p construction which has to be replace by an dynamically allocated Packet *. Given the number of tests in suricata, this task is very dangerous:

I thus decide to give a try to coccinelle which is a "program matching and transformation engine which provides the language SmPL (Semantic Patch Language) for specifying desired matches and transformations in C code". Well, from user point of view it is a mega over-boosted sed for C.

My complete semantic patch for the suricata modification is around 55 lines and the resulting patch on suricata has the following git stat:

and a size of 407Ko. This gives an idea of the power of coccinelle.

Here's a light example of what coccinelle is able to do. If you want to read further just go on coccinelle website or read my "Coccinelle for the newbie" page.

I like to thanks Holger Eitzenberger for talking me about the existence of Coccinelle and I give out a great thanks at Julia Lawall for her expertise and her patience. She helps me a lot during my discovery of Coccinelle.

I have recently faced the challenge to rewrite a git repository. It has two problems:

I then dig into the doc and it leads me directly to ‘filter-branch’ which was the solution of my two problems. The names of the command is almost self-explanatory: it is used to rewrite branches.

A rapid reading of ‘git help filter-branch’ convince me to give a try to the ‘subdirectory-filter’ subcommand:

Only look at the history which touches the given subdirectory. The result will contain that directory (and only that) as its project root. Implies
--remap-to-ancestor

Thus to split the directory, I have simply to copy my repository via a clone call and run the filter command:

Doing once again for the deps directory and I had my two new repositories ready to go.

At once during this cleaning task, I wanted to avoid to loose my directory structure. I mean I want to keep the ‘src’ directory in the ‘src’ repository. Thanks to the examples at the end of ‘git help filter-branch’, I’ve found this trickier command:

This literally do the following : for each commit (--index-filter), suppress (rm) recursively (-r) all items of the ‘deps’ directory. If a commit is empty then suppress it from history (--prune-empty).

‘deps’ directory was known to take a lot of disk space and I thus done a check to see the size of the ‘src’ directory. My old friend ‘du’ sadly told me that the split repository has the same size as the whole one ! There is something tricky here. After googling a little bi I’ve found out (mainly by reading Luke Palmer post) that git never destroy immediately a commit. It is always present has an object in the .git/objects directory. To ask for an effective suppression, you’ve got to tell git that some objects are expired and can now be destroyed. The following command will destroy all objects unreachable since more than one day:

Unreachable objects means objects that exist but that aren’t readable from any of the reference nodes. This last definition is taken from ‘git help fsck’. The ‘fsck’ command can be used to check the validity
and connectivity of objects in the database. For example to display unreachable object, you can run:

My problem on badly authored commits was still remaining. From the documentation, --env-filter subcommand was the one I need to use. The idea of the command is that it will iterate on every commit of the branch giving you some environnement variables:

If you modify one of them and export the result, the commit will be modifed accordingly. For example, my problem was that commit
from ‘jdoe’ are in fact from ‘John Doe’ which mail is ‘john.doe@example.com’. I thus run the following command:

Git show here once again it has been made by semi-god hackers that have developped it to solve their own source management problems.

This made the bug self contained and not dependant of other applications. Given the fact that the effect of this bug is a crash of the calling program, it could be interesting to release a new version of the sasl library. (my 0.02$) 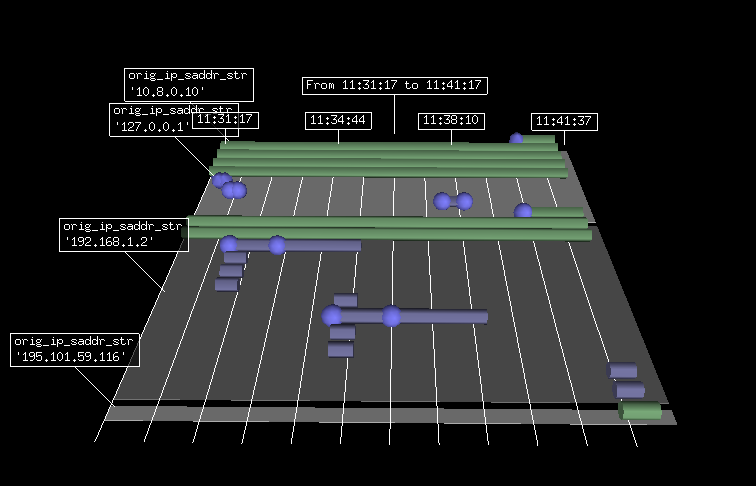