Kronosnet is a “I conceived it when drunk but it works well” VPN implementation. It is using an Ether TAP for the VPN to provide a lyaer 2 vpn. To avoid reinventing the wheel, it is delegating most of the work to the kernel. It supports multilink and redundancy of servers. On multilink side, 8 links can be done per-host to help redundancy.

One of the use of this project is the creation of private network in the cloud as it can be easily setup to provide redundancy and connection for a lot of clients (64k simultaneous clients). And because a layer 2 VPN is really useful for this type of usage. 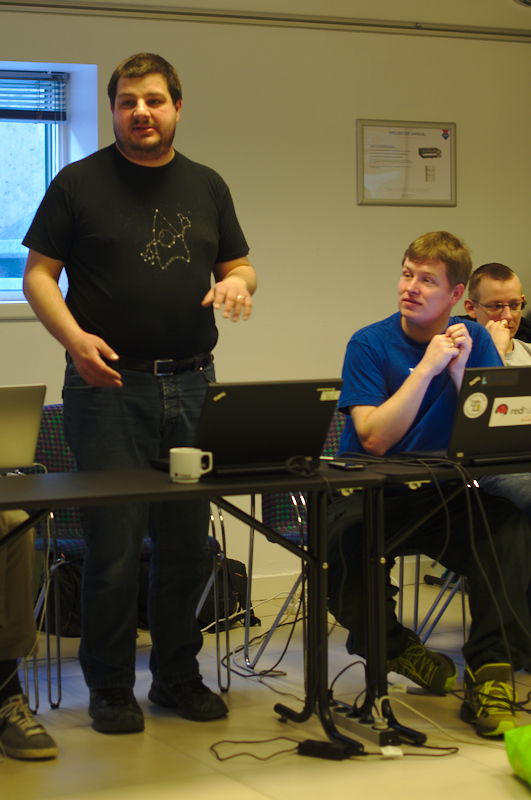 Configuration is made via a CLI comparable to the one of classical routers.

Fabio has run a demonstration on 4 servers and shows that cutting link has no impact on a ping flood thanks to the multilink system.

I’ve made yesterday a presentation of ulogd2 at Open Source Days in Copenhagen. After a brief history of Netfilter logging, I’ve described the key features of ulogd2 and demonstrate two interfaces, nf3d and djedi.

This video demonstrates some features of nf3d:

This screencast is showing some of the capabilities of djedi:

Thanks a lot to the organizers for this cool event.

Iptables duplicate work for each family and is using a socket protocol which is far too static. Xtables2 is an ongoing effort to evolve the packet filter.
It aims at providing finer frained modification (and not the whole ruleset modification).

xtables syntax is quite similar but not the same. libxtadm is a high-level library for ruleset inspection/manipulation.

This is access to raw packet inside Linux. It is used by libpcap and by other projects like Suricata.
PF_PACKET performance can be improved via dedicated features:

BPF architecture looks like a small virtual machine with register and memory stores. It has different instructions and the kernel has its own kernel extensions to access to cpu number, vlan tag.

Netsniff-ng is a set of minimal tools:

netsniff-ng can be used to capture with advanced option like using a dedicated CPU or using a BPF filter compiled via bpfc instead of a tcpdump like expression.

trafgen can used to generate high speed traffic, using multiple CPUs, and complex configuration/setup even including fuzzing.
A description of the packet can be given where each element is built using different functions.
It can even be combined with tc (for example netem to simulate specific network condition).

The future include to find a way to utilize multicore efficiently with packet_fanout and disk writing.

ConnMan is a connection manager which integrate all critical networking components. It provides a smart D-Bus API to develop an User Interface. It is plugin oriented and all different network stacks are implemented in different modules.
Connection sharing (aka tethering) is using Netfilter to setup NAT masquerading. So it is a simple usage.

Application connectivity is a more advanced part involving Netfilter as it makes a use of statistics and differenciated routing. For example, in a car, service data must be sent to manufacturer operator and not on the owner network.

To do so a session system has been implemented. Application can be modified to open a session to ConnMan. This allow to define a per-session policy for routing and accounting.

ConnMan team wanted to use a C API to do rules modification but this was difficult with iptables and xtables. This is not an official API so it is subject to bugs and change.

ConnMan team has then switch to nftables and is currently working on stabilizing nftables to ensure the acceptation of the project and of the maintainability of their solution in the long time. This work is not yet upstream but there is good chance it will be accepted.

Centralized firewall design does not scale well when dealing with a lot of servers. It begins to collapse after a few thousands rules.
Furthermore, to be able to have an application A to connect to server B, it would take a workflow and possibly 3 weeks to get the opening.

Service are autonomous. They call each other using a standard protocol. The architecture is described by a list of dependencies between services.
You can then specify security via things like ACCEPT Caching TO Frontend ON PORT 80.
But this force you to do provisioning each time a server start.

Chef is an open source automation server that is queried by server to get information about their configuration.

Chef maintains a centralized database of all services and so it can derived from that the security policy. So if we manage to express the contraint in term of Netfilter rules, we will be able to build a firewall policy.

AFW is just that.

AFW is using a service oriented syntax where object like destination can be specified by doing a Chef search. Thus, each time Chef is launched, the object get reevaluated and the filtering rules is updated to the current state of the network.

Custom rules can be added using traditional iptables syntax. AFW is writing outbound rules using the owner target. This allow to define a policy per service and this policy can be easily searched by the developper by simply looking user policy.

The JSON document pushed to the chef node contains everything and it can be modified by the server. So it is possible for a server to trigger opening of ports by changing some of its parameters. A solution is to split chef in a chef for configuration and a chef for policy.

iptables is enough sufficient but in some cases limit are found:

Independant study available at d(a)emonkeeper’s purgatory has shown that the performance of ipset are almost constant with respect to the number of filtered hosts:

The originating project was ippool featuring a a basic set and after some time it has been taken over by Jozsef and renamed ipset. A lot of type of sets are now handled.

ipset 6.x is the current version and features an impressive number of sets.

The communication between kernel and userspace is made via netlink

It is not possible to delete a set if it is referenced in kernel by iptables. So it may be appear as a problem but it is possible to use renaming and swapping operation to fix the issue.

The set type are numerous as pointed out here: ipset feature

Using different sets, it is possible to express a global policy in a few iptables rules.

Thanks to Florian Westphal, it is possible to access to set in tc.

It will soon be possible to have per-element counters and this will allow to do some interesting accounting.

Harald Welte when asked about IPv6 NAT was answering: “it will be over my dead body”. It is now available in official kernel.

To resume the arguments of NAT, Patrick McHardy used this video:

A single, clean, bug free implementation is better than a lot of incomplete non official implementations that where already available.

It is mainly based to on IPv4 implementation and provide from a user perspective a interface similar to IPv4.

It also features an implementation of RFC 6296: stateless network prefix translation. It operates on a packet base and is completely stateless.

It is implemented as an ip6tables target SNPT and DNPT which have to be used on both way to handle the modifications required by RFC 6296.

An implementation of NAT64 is currently in progress and should be available in the coming weeks.

nftable is a kernel packet filtering framework to replaces iptables. It brings no changes in the core (conntrack, hooks).

Match logic is changed: you fetch keys and once you have your key set, you make operation on them. Advanced and specialized matchs are built upon this system.

In iptables, extension were coded in separate files and they must be put in iptables source tree. To act, they must modify on a binary array storing the ruleset and injecting it back to the kernel. So every update involve a full download and upload of the whole ruleset.

nftables is working on a message based basis (exchanged via netlink) and thus allow better handling of incremental modification.

nftables will provide a high level library which can be used to manipulate ruleset in dedicated tools.

From userspace, backward compatibility is here with utilities fully compatible iptables and ip6tables. Even script wil not have been changed

But there is some new things brought by the change:

There is work in progress on a new utility nft. It will provide a new syntax that will allow to do more efficient matching. It will be possible to form couple of keys and do high speed matching on them.

Patrick (aka kaber) has just made available his work on memory mapped netlink. Both the kernel and the libmnl part are available on git.kernel.org.

You can pull kernel code other net-next tree:

Libmnl code can be fetched:

Once done a NETLINK_MMAP kernel compilation option is then available via make config.

Documentation is available in the Linux tree. It is in the file: Documentation/networking/netlink_mmap.txt