Since the beginning of July 2012, OISF team is able to access to a server where one interface is receiving
some mirrored real European traffic. When reading "some", think between 5Gbps and 9.5Gbps
constant traffic. With that traffic, this is around 1Mpps to 1.5M packet per seconds we have to study.

The box itself is a standard server with the following characteristics:

The objective is simple: be able to run Suricata on this box and treat the whole
traffic with a decent number of rules. With the constraint not to use any non
official system code (plain system and kernel if we omit a driver).

The code on the box have been updated October 4th:

The setup is explained by the following schema: 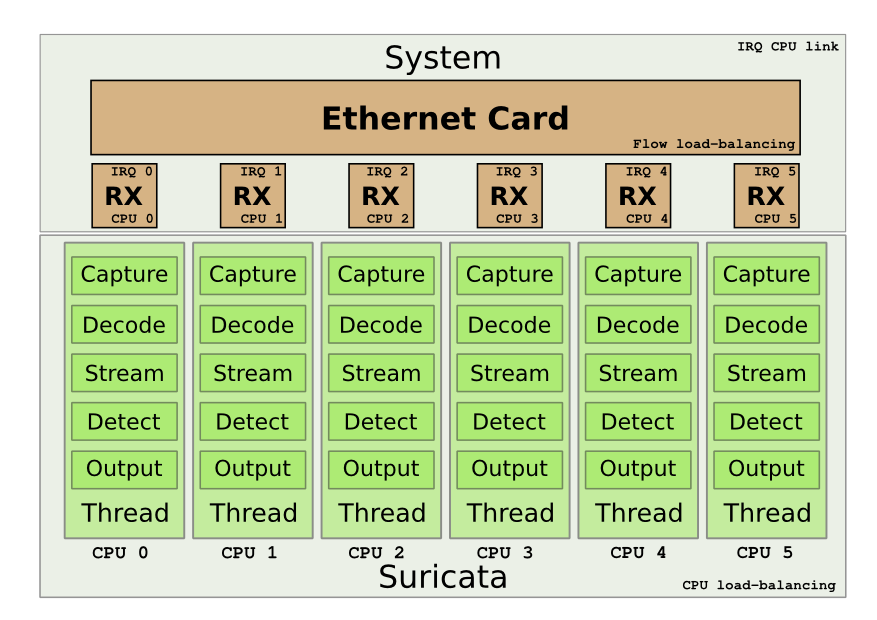 We want to use the multiqueue system on the Intel card to be able to load balance the treatment. Next goal is to have one single CPU to treat the packet from the start to the end.

Peter Manev, Matt Jonkmann, Anoop Saldanha and Eric Leblond (myself) have been involved in
the here described setup.

The Intel NIC benefits from a multiqueue system. The RX/TX traffic can be load-balanced
on different interrupts. In our case, this permit to handle a part of the flow on each
CPU. One really interesting thing is that the load-balancing can be done with respect
to the IP flows. By default, one RX queue is created per-CPU.

More information about multiqueue ethernet devices can be found in the document
networking/scaling.txt in the Documentation directory of Linux sources.

Suricata is able to do zero-copy in AF_PACKET capture mode. One other interesting feature
of this mode is that you can have multiple threads listening to the same interface. In
our case, we can start one threads per queue to have a load-balancing of capture on all
our resources.

Suricata has different running modes which define how the different parts of the engine
(decoding, streaming, siganture, output) are chained. One of the mode is the ‘workers’
mode where all the treatment for a packet is made on a single thread. This mode is
adapted to our setup as it will permit to keep the work from start to end on a single
thread. By using the CPU affinity system available in Suricata, we can assign each
thread to a single CPU. By doing this the treatment of each packet can be done on
a single CPU.

But this does not solve one problem which is the link between the CPU receiving the packet
and the one used in Suricata.
To do so we have to ensure that when a packet is received on a queue, the CPU that will
handle the packet will be the same as the one treating the packet in Suricata. David
Miller had already planned this kind of setup when coding the fanout mode of AF_PACKET.
One of the flow load balancing mode is flow_cpu. In this mode, the packet is delivered to
the same track depending on the CPU.

The dispatch is made by using the formula "cpu % num" where cpu is the cpu number and
num is the number of socket bound to the same fanout socket. By the way, this imply
you can’t have a number of sockets superior to the number of CPUs.
A code study shows that the assignement in the array of sockets is incrementally made.
Thus first socket to bind will be assigned to the first CPU, etc..
In case, a socket disconnect from the set, the last socket of the array will take the empty place.
This implies the optimizations will be partially lost in case of a disconnect.

By using the flow_cpu dispatch of AF_PACKET and the workers mode of Suricata, we can
manage to keep all work on the same CPU.

The operating system running on is an Ubuntu 12.04 and the driver igxbe
was outdated.
Using the instruction available on Intel website (README.txt),
we’ve updated the driver.
Next step was to unload the old driver and load the new one

Doing this we’ve also tried to use the RSS variable. But it seems there is an issue, as we still having 16 queues although the RSS params was
set to 8.

Once done, the next thing is to setup the IRQ handling to have each CPU linked in order with
the corresponding RX queue. irqbalance was running on the system and the setup was
correctly made.

The interface was using IRQ 101 to 116 and /proc/interrupts show a diagonale indicating
that each CPU was assigned to one interrupt.

If not, it was possible to use the instruction contained in IRQ-affinity.txt available
in the Documentation directory of Linux sources.

But the easy way to do it is to use the script provided with the driver:

Note: Intel latest driver was responsible of a decrease of CPU usage. With Ubuntu kernel version, the CPU usage as 80% and it is 45% with latest Intel driver.

The card used on the system was not load-balancing UDP flow using port. We had to use
‘ethtool’ to fix this

In our case, the default setting of the ring parameters of the card, seems
to indicate it is possible to increase the ring buffer on the card

Our system is now ready and we can start configuring Suricata.

The run mode has been set to ‘workers’

As pointed out by Victor Julien, this is not necessary to increase max-pending-packets too much because only a number of packets equal to the total number of worker threads can be treated simultaneously.

Suricata 1.4beta1 introduce a delayed-detect variable under detect-engine. If set to yes, this trigger a build of signature after the packet capture threads have started working. This is a potential issue if your system is short in CPU as the task of building the detect engine is CPU intensive and can cause some packet loss. That’s why it is recommended to let it to the default value of no.

Affinity settings permit to assign thread to set of CPUs. In our case, we onlSet to have in exclusive mode one packet thread dedicated to each CPU. The setting
used to define packet thread property in ‘workers’ mode is ‘detect-cpu-set’

The idea is to assign the highest prio to detect threads and to let the OS do its best
to dispatch the remaining work among the CPUs (balanced mode on all CPUs for the management).

Some tuning was needed here. The network was exhibing some serious fragmentation
and we have to modify the default settings

The ‘trackers’ variable was not documented in the original YAML configuration file.
Although defined in the YAML, the ‘max-frags’ one was not used by Suricata. A patch
has been made to implement this.

The variables relative to streaming have been set very high

To detect the potential issue with memcap, one can read the ‘stats.log’ file
which contains various counters. Some of them matching the ‘memcap’ string.

Suricata can now be runned with the usual command line

Tests have been made by simply running Suricata against the massive traffic
mirrored on the eth3 interface.

At first, we started Suricata without rules to see if it was able to deal
with the amount of packets for a long period. Most of the tuning was done
during this phase.

To detect packet loss, the capture keyword can be search in ‘stats.log’.
If ‘kernel_drops’ is set to 0, this is good

The statistics are available for each thread. For example, ‘AFPacketeth315’ is
the 15th AFPacket thread bound to eth3.

When this phase was complete we did add some rules by using Emerging Threat PRO rules
for malware, trojan and some others:

This ruleset has the following characterics:

This is thus a decent ruleset with a high part of application level event which require a
complex processing. With that ruleset, there is more than 16 alerts per second (output in unified2 format).

With the previously mentioned ruleset, the load of each CPU is around 60% and Suricata
is remaining stable during hours long run.

In most run, we’ve observed some packet loss between capture start and first time Suricata grab the statistics. It seems the initialization phase is not fast enough.

OISF team has access to the box for a week now and has already
managed to get real performance. We will continue to work on it to provide
the best possible experience to all Suricata’s users.

Feel free to made any remark and suggestion about this blog post and this setup.

13 thoughts on “Suricata, to 10Gbps and beyond”