One of the main advantage of nftables over iptables is its native handling of set. They can be used for multiple purpose and thanks to the timeout capabilities it is easy to do some fun things like implementing port knocking in user space. 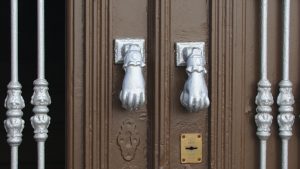 The idea of this technic is fairly simple, a closed port is dynamically opened if the user send packets in order to a predetermine series of ports.

To implement that on a system, let’s start from ruleset where Input is closed but for a SSH rule using a set of IPv4 address as parameter:

This gives a control of which IP get access to the SSH server. It contains two fixed IP but there is a timeout flag set allowing the definition of entry with timeout.

To get the first step done we use the fact that nftables can add element to a set in the packet path:

Once this is done, second step is a simple derivative of first one:

We add these rules in the prerouting table so kernel won’t do any connection tracking for these packets.

This gets us the following ruleset:

Poor man testing can be

We run this and our IP is in the Client_SSH_IPv4 set:

and we can SSH to IPKNOCK 😉

And here is the complete ruleset:

For more information on nftables feel free to visit the Nftables wiki.

Powerline is a status extension software changing the prompt or status line for shell, tmux and vim.

The result is nice looking and useful for bash:

Only point is that even if documentation is good, installation is not straightforward. So here’s what I’ve done.

On Ubuntu 16.04 you may have to install python3-powerline instead of python-powerline.

Then edit the file to change default theme to default_leftonly that bring git status:

Now, you need to refresh the fonts or restart X.

Then edit ~/.bashrc and add at then end

Easiest way is to have vim addon installed:

Then you can simply do:

Installation is a bit more complex as you need to install a patched font from Powerline modified fonts.

I’m running Debian sid on my main laptop and if most of the time if works well there is from time to time some issues. Most of them fixes after a few days so most of the time I don’t try to fix them manually if there is no impact on my activity. Since a few weeks, the postinst script of avahi daemon was failing and as it was not fixing by itself during upgrade I’ve decided to have a look at it.

As Debian sid is using systemd it is super easy to find a decent troll subject. Here it was the usual thing, systemctl was not managing to start correctly the daemon and giving me some commands if I wanted to know more:

So after a little prayer to Linux copy paste god resulting in a call to journalctl I had the message:

So a daemon was not able to fork on a rather quiet system.

A little googling lead me to this not a bug explaining the avahi configuration includes ulimit settings. So I checked my configuration and found out that Debian default configuration file as a hardcoded value of 5.

My next command was to check the process running as avahi:

So an Elasticsearch daemon was using the avahi user. This could seems strange if you did not know I’m running some docker containers (see https://github.com/StamusNetworks/Amsterdam).

In fact in the container I have:

So the issue comes from the fact we have:

That’s a real problem, the space of user ID in the container and in the host are identical and this can result in some really weird side effect.

At the time of the writing I did not found something to setup the user id mapping that is causing this conflict. An experimental feature using the recent user namespace in Linux will permit to avoid this conflict in a near future but it is not currently mainstream.

A super bad workaround was to stop the docker container before doing the upgrade. It did do the job but I’m not sure I will have something working at reboot.

I really hope this new feature in docker will soon reach mainstream to avoid similar issue to other people.

I’ve just finished my talk on Linux kernel packet capture technologies at Kernel Recipes 2015. I would like to thanks the organizer for their great work. I also thank Frank Tizzoni for the drawing 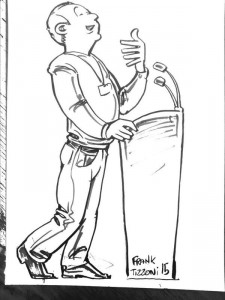 In that talk, I’ve tried to do an overview of the history of packet capture technologies in the Linux kernel. All that seen from userspace and from a Suricata developer perspective.

Now that Debian Jessie is out, it was the time to do an upgrade of my Elasticsearch servers. I’ve got two of them running in LXC containers on my main hardware system

Upgrading to Jessie was straightforward via apt-get dist-upgrade.

After some research, I’ve discovered that the /usr/lib/systemd/system/elasticsearch.service was starting elasticsearch with:

And the variables like CONF_FILE defined in /etc/default/elasticsearch were commented and it seems it was preventing Elasticsearch to start. So updating the file to have:

was enough to have a working Elasticsearch.

As pointed out by Peter Manev, to enable the service at reboot, you need to run as root:

I hope this will help some of you and let me know if you find better solutions.

I’ve been lucky enough to do a talk during the third edition of Kernel Recipes. I’ve presented the evolution of nftables durig the previous year.

You can get the slides from here: 2014_kernel_recipes_nftables.

Thanks to Hupstream for uploading the video of the talk:

Not much material but this slides and a video of the work done during the previous year on nftables and its components:

Iptables and suricata as IPS

Building a Suricata ruleset with iptables has always been a complicated task when trying to combined the rules that are necessary for the IPS with the firewall rules. Suricata has always used Netfilter advanced features allowing some more or less tricky methods to be used.

For the one not familiar with IPS using Netfilter, here’s a few starting points:

So the ruleset needs to send all packets to the IPS. A basic ruleset for an IPS could thus looks like:

With such a ruleset, all packets going through the box are sent to the IPS.

If now you want to combine this with your ruleset, then usually your first try is to add rules to the filter chain:

But this will not work because of point 2: All packets sent via NFQUEUE to the IPS are or blocked or if accepted, leave the FORWARD chain directly and are going for evaluation to the next chain (mangle POSTROUTING in our case).
With such a ruleset, the result is that there is no firewall but an IPS in place.

As mentioned before there is some existing solutions (see Building a Suricata ruleset for extensive information). The simplest one is to dedicated one another chain such as mangle to IPS:

No conflict here but you have to be sure nothing in your system will use the the mangle table or you will have the same problem as the one seen previously in the filter chain. So there was no universal and simple solution to implement an IPS and a firewall ruleset with iptables.

IPS the easy way with Nftables

In Nftables, chains are defined by the user using nft command line. The user can specify:

With this setup, a packet will reach the firewall chain first where it will be filtered. If the packet is blocked, it will be destroy inside of the kernel. It the packet is accepted it will then jump to the next chain following order of increasing priority. In our case, the packet reaches the IPS chain.

Now, that we’ve got our chains we can add filtering rules, for example:

And for our Suricata IPS, that’s just trivial:

The queue target in nftables

The complete support for the queue target will be available in Linux 3.14. The syntax looks as follow:

This rule sends matching packets to 2 load-balanced queues (total 2) starting at 3 (num 3).
fanout is one of the two queue options:

For a complete description of queueing mechanism in Netfilter see Using NFQUEUE and libnetfilter_queue.

If you want to test this before Linux 3.14 release, you can get nft sources from nftables git and use next-3.14 branch.

For reference, here are the priority values of some important internal operations and of iptables static chains:

For example, one can create in nftables an equivalent of the raw PREROUTING chain of iptables by doing:

When doing some tests on Suricata, I needed to setup a small IPv6 network. The setup is simple with one laptop which is Ethernet connected to a desktop. And the desktop host a Virtualbox system.
This way, the desktop can act as a router with laptop on eth0 and Vbox on vboxnet0.

To setup the desktop/router, I’ve used:

To setup the laptop who already has a IPv6 public address on eth0, I’ve done:

Almost same thing on the Vbox:

This setup should be enough but when I tried to do from the laptop:

I got a failure.

I then checked the routing on the laptop:

A public IPv6 address is used as source address and this is confirmed by a tcpdump on the desktop:

And the desktop does not know how to reach this IP address because it does not have a public IPv6 address.

On the laptop, I’ve dumped wlan0 config to check the address:

Deleting the address did fix the ping issue:

And getting the route did confirm the fix was working:

All that to say, that it can be useful to desactivate temporary IPv6 address before setting up a test network:

I’ve just gave a talk about nftables, the iptables successor, at Kernel Recipes 2013. You can find the slides here:
2013_kernel_recipes_nftables

Here’s the video of my talk:

The video has been generated with gource. Git history of various components have been merged and the file path has been prefixed with project name.

The first news is that it works! It is possible to use tc to setup QoS on IPv6 but the filter have to be updated.

When working on adding IPv6 support to lagfactory, I found out by reading tc sources and specifically ll_proto.c that the keyword to use for IPv6 was ipv6. Please read that file if you need to find the keyword for an other protocol.
So to send packet with Netfilter mark 5000 to a specific queue, one can use:

All would have been simple, if I was not trying to have IPv6 and IPv4 support. My first try was to simply do:

But the result was this beautiful message:

Please note the second message displayed that warn you you talk to rudely to kernel and that he just kick you out the room.

The fix is simple. In fact, you can not use twice the same prio. So it is successful to use: