Following my talk at SSTIC, I’ve released a new tool called opensvp. Its aim is to cover the attacks described in this talk. It has been published to be able to determine if the firewall policy related to Application Layer Gateways is correctly implemented.

It has been developed in Python and uses scapy to implement the spoofing attack on ALGs.

For usage and download, you can have a look at opensvp page. The attack against helpers is described in the README of opensvp.

The slides of my CansecWest talk can now be downloaded: Playing with Network Layers to Bypass Firewalls’ Filtering Policy.

The associated video demonstrations are available:

First video demonstrates how to use forged IRC protocol command (DCC request) to be able to open connection to a NATed client from internet.

Second video demonstrates the effect of the attack on helpers on a non protected Netfilter Firewall.

Third video demonstrates the effect of the attack on helpers on a badly configured Checkpoint firewall.

Victor Julien has just pushed a new feature to suricata’s git tree. It brings improvements to the AF_PACKET capture mode.

This capture mode can be used on Linux. It is the native way to capture packet. Suricata is able to use the interesting new multithreading feature provided by AF_PACKET on recent kernels: it is possible to have multiple capture threads receiving the packet of a single interface.

The commits add mmaped ring buffer support to AF_PACKET capture and also provide a zero copy mode. Mmaped ring buffer is mechanism similar to the one used by PF_RING. The kernel allocates some memory to store the packets and share this memory with the capture process. Instead of sending messages, the kernel just write to the shared memory and the process capture reads it. This is less consuming in term of CPU ressource and helps to increase the capture rate. But the main avantage of this technique is that the capture process can treat the packets without making a copy and this saves a lot of time

To activate this features, you need a Suricata compiled from latest git and you need to modify some entries in your suricata.yaml file. You have to tell suricata that you want to activate the mmap feature. For example to activate the feature on eth0, you have to add ‘use-mmap’ to your configuration:
[code]
af-packet:
– interface: eth0
use-mmap: yes
[/code]

You can then run Suricata with the command:

This setup will not activate the zero copy feature which is currently dependant of the running mode. You will need to activate the worker mode to enable zero copy. To do so, run Suricata with a command similar to this one:

This code should provide an interesting performance boost to the AF_PACKET capture system. I’ve no number to provide now but I will be happy to hear some if you make some tests

Suricata is an IDS/IPS engine. To build a complete solution, you will need to use other tools.

The following schema is a representation of a possible software setup in the case Suricata is used as IDS or IPS on the network. It only uses opensource components: 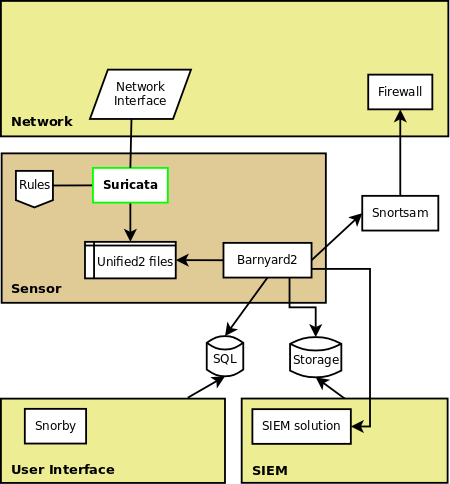 Suricata is used to sniff and analyse the traffic. To detect malicious traffic, it uses signatures (or rules). You can download a set of specialised rules from EmergingThreats.

To analyse the alerts generated by Suricata, you will need an interface such as, for example, snorby.

But this interface will need to have an access to the data. This is done by storing the alerts in a database. The feed of this database can be done by barnyard2 which take the files outputted by suricata in unified2 and convert and send them to a database (or to some other format).

If you want counter-measure to be taken (such as blocking for a moment attacker at the firewall level), you can use snortsam.

More complex setup can include interactions with a SIEM solution.

Following the presentation I’ve made during the 8th Netfilter Workshop, it was decided to write a document containing the best practices for a secure use of iptables and connection tracking helpers.

This document called “Secure use of iptables and connection tracking helpers” is now available on this site. It contains recommendations that should be followed carefully if you are the administrator of a Netfilter/Iptables or the developer of a Netfilter based software.

Some new features have recently reach Suricata’s git tree and will be available in the next development release. I’ve worked on some of them that I will describe here.

IDS live mode in suricata (pcap, pf_ring, af_packet) now supports the capture on multiple interfaces. The syntax of the YAML configuration file has evolved and it is now possible to set per-interface variables.

For example, it is possible to define pfring configuration with the following syntax:

This set different parameters for the eth4 and eth2 interfaces. With that configuration, it the user launches suricata with

it will be listening on eth4 and

If you want to run suricata on a single interface, simply do:

This syntax can be used with the new AF_PACKET acquisition module describe below.

The running modes have been extended by a new running mode available for pfring and af_packet which is called workers. This mode starts a configurable number of threads which are doing all the treatment from packet acquisition to logging.

Suricata now supports acquisition via AF_PACKET. This linux packet acquisition socket has recently evolved and it supports now load balancing of the capture of an interface between userspace sockets. This module can be configured like show at the start of this post. It will run on almost any Linux but you will need a 3.0 kernel to be able to use the load balancing features.

I gave a talk about Suricata entitled Suricata, rethinking IDS/IPS at Libre Software Meeting (RMLL in french). The slides can be downloaded from the RMLL website.

Thanks a lot to Christophe Brocas and Mathieu Blanc for the organisation of the security track of LSM. 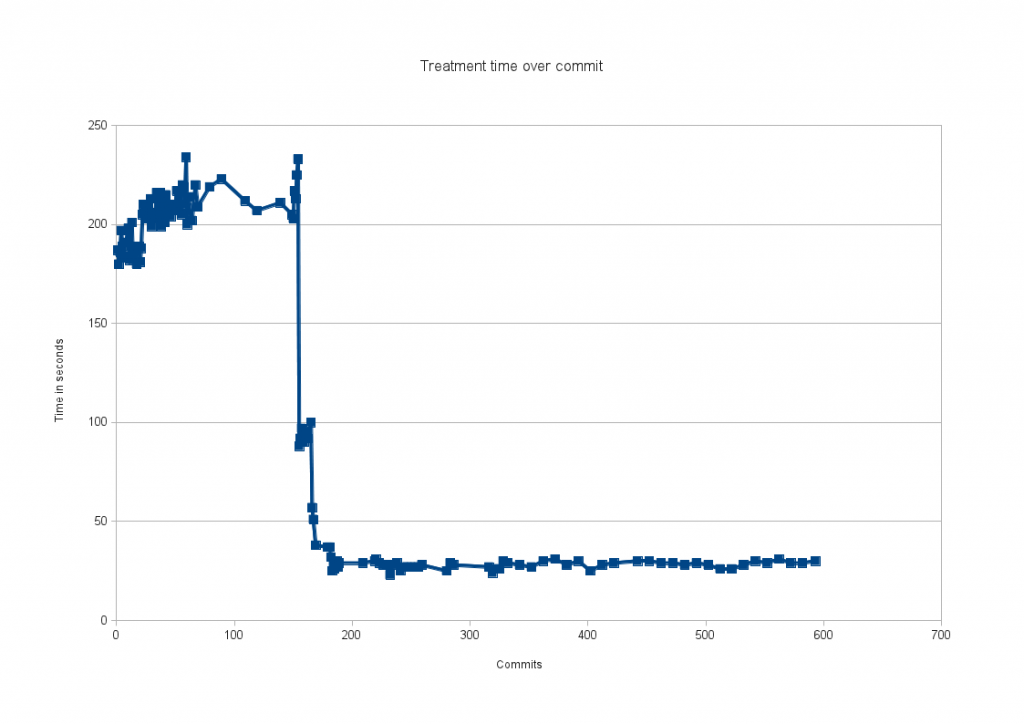 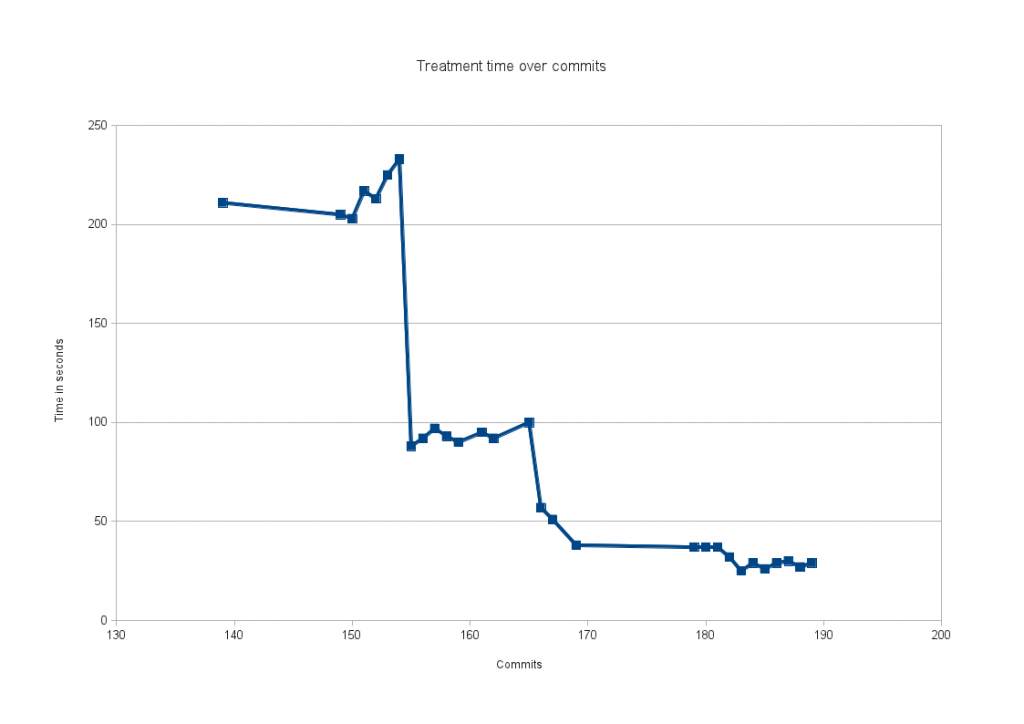